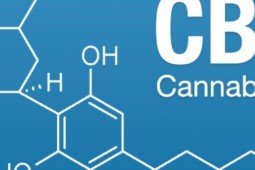 Cannabidiol (CBD), a non-psychoactive cannabinoid is currently under investigation as a potential therapy for severe, treatment resistant epilepsy. Unlike delta-9-tetrahydrocannabinol (THC), CBD  does not cause the “high” often associated with cannabis oil. Instead CBD oil has been found to have anticonvulsant and antipsychotic effects. Anecdotes of medicinal cannabis’s ability to alleviate seizures have been around for over 100 years but its only recently that larger scale clinical trials have been performed.

The effect of CBD oil for epilepsy

In a recent study published in the New England Journal of Medicine, Devinsky et al. investigated the effect of CBD oil in 120 children and young adults with Dravet Syndrome, a relatively rare form of epilepsy that is often refractory to anticonvulsant therapy (1). In this randomized, double-blind, placebo controlled trial, CBD oil demonstrated significant improvement over placebo. The median frequency of seizures per month decreased from 12.4 to 5.9 with CBD oil in comparison to 14.9 to 14.1 with placebo. In addition, 43% of patients on CBD oil reached at least a 50% reduction in convulsive seizure frequency compared with 27% on placebo.

Despite the very convincing anecdotal reports of individual patients who have had miraculous effects from taking CBD oil, (such as Charlotte Figi, a young girl with Dravet syndrome and the name sake of Charlotte’s Web, a high CBD low THC strain of cannabis), large scale, properly controlled trials are essential to verify the efficacy and safety of CBD oil in young children with epilepsy. CBD oil is also known to interact with anti-epileptic drugs via cytochrome p450 metabolism and so it is important to for any parent that may be sourcing CBD oil for their child to inform their neurologist.

In Australia, CBD oil  (<2% THC and other cannabinoids) is classified as Schedule 4 and can be accessed via the Special Access scheme, please see blog on accessing medicinal cannabis in Australia for further information. In addition, Epidiolex, an oral CBD therapy from GW Pharmaceuticals can be accessed in NSW via a  canna. To be eligible for this scheme the patient must have severe, intractable childhood epilepsy, be under the age of 18 and to have unsuccessfully trialed at least 5 anticonvulsant drugs.

All in all, CBD oil is a very promising therapy for treatment resistant epilepsy however, more clinical trials with larger n numbers are needed to fully verify this. A quick search on ClinicalTrials.gov brings up 37 registered trials so hopefully more data will be available in the not too distant future.