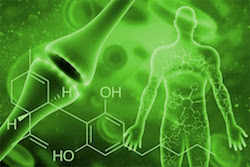 In the past decade knowledge of the endocannabinoid system (ECS) has slowly seeped out from the academic sphere into the public domain. In the 1980s and 1990s, a series of discoveries led scientists to identify the ECS as an integral part of not only human physiology, but also in a variety of other animal species.

Key components of the endocannabinoid system

The ECS comprises two G-coupled receptors, CB1 and CB2 that can be found systemically throughout the body. Plant-derived or exogenous (derived from outside the body) cannabinoids have the ability to interact with these receptors.

Additionally, the body itself produces its own endogenous (made within the body) cannabinoids, anandamide and 2-AG, both of which have a strong affinity with the ECS receptors.

The body also has ways to produce, regulate and degrade endocannabinoids when required. Enzymes that catalyse the breakdown of endocannabinoids (thereby modulating their actions and longevity) themselves have therapeutic potential. The sophistication of this somewhat newly discovered body system is a showcase of its importance in healthy physiological function.

Through interactions between endogenous cannabinoids and their receptors, the ECS is implicated in the regulation of mood, appetite, pain, memory, stress, immune responses and gastrointestinal function.

Homeostasis: The role of the ECS in biological balance

Homeostasis is the constant balancing act played by human bodies. It aims to keep physiological function in a state of equilibrium, never too hot, cold, dry, acidic or viscous etc. This balancing act is maintained within such a narrow range at a cellular level, it is a wonder our bodies manage to keep conditions just right all the time.

As the ECS is a part of human development from conception, it has a crucial place in the initial formation and ongoing regulation of neurons throughout the body.

CB1 receptors are primarily known for their interaction with THC -facilitating the psychoactive effects of cannabis- yet they are also abundant in the brain and nervous system.

By binding with the anandamide, CB1 receptors have the capacity to regulate the flow of information between neurons, maintaining homeostasis through inhibiting or allowing signals to transmit to various systems of the body.

CB2 receptors have a strong presence in the liver and immune system. They are associated with the modulation of inflammation, pain and the enteric nervous system – the brain of the gut.

Additionally, cannabinoid receptors can be found in the cardiovascular, reproductive and skeletal systems, contributing to the regulation of blood pressure, normal reproductive function and the maintenance of bone health.

By maintaining this fine balancing act in neurotransmitters and by managing the interplay of various body systems, the ECS and its components contribute to the body’s ability to maintain homeostasis in numerous and fundamental ways.

Currently, there is enough knowledge surrounding how the ECS is implicated in the treatment of certain conditions, for cannabis-educated practitioners to confidently treat patients by using phytocannabinoids – cannabinoids that occur naturally in the cannabis plant.

The use of therapeutics agents that antagonise cannabinoid receptors or encourage the production endocannabinoids in specific ways is still largely limited to the confines of clinic research, yet outcomes so far are promising.

In regards to the gastrointestinal tract, targeting the ECS has been connected to reducing inflammation for patients with Irritable Bowel Diseases, and in both animal and human studies, amelioration of symptoms has been reported.

By utilising our knowledge of the ECS, targeted medical cannabis formulations can be created to activate endocannabinoid receptors in the gastrointestinal tract, with the possibility of relieving inflammation and discomfort.

Reductions in factors contributing to cardiovascular diseases have been observed when therapeutically activating CB2 receptors. Research is also unveiling possibilities for treating tumour growth, invasion and proliferation through the ECS.

Laboratory investigations into medical cannabis, the endocannabinoid system and cancers are happening all over the world, with promising results being seen in Israel, Spain and trials underway in Australia by initiatives such as the Lambert Initiative for Cannabinoid Therapeutics at the University of Sydney.

The endocannabinoid system is a promising medical frontier that we are just beginning to uncover. Despite its complexity, there’s enough evidence to encourage further investigations into the direct influence of the ECS on specific conditions and its importance in human physiology.